Is a tablet or 2-in-1 laptop with a stylus useful for a student?

My daughter will be starting university and already has a more-than-adequate laptop for essay writing and Netflix. But rather than carry it to and from lectures all the time, we wondered if it would be worth investing in a tablet or smaller 2-in-1 laptop with a stylus for note taking. Or do you think it would be better to stick with a small screen laptop? Matt

There are two issues here that go well beyond product choice, and can only be decided by you and your daughter. The first is whether a change in circumstances – going to university – requires the adoption of a new technology, whether it be a tablet or stylus or both. I’m assuming that your daughter doesn’t use either of these, or you would already know the answer.

The second issue is how a new device fits in with the ones she already uses. The days when everybody did everything with a desktop PC have long gone, and most people use a mixture of microprocessor-powered devices. These include smartphones, handhelds, tablets, Chromebooks, laptops, all-in-ones, desktops, workstations, games consoles and NAS servers, sometimes supplemented with smartpens and digital watches, cameras and recorders.

For example, it wouldn’t be very useful to run a system that comprised a 6in smartphone, a 7in or 8in tablet and a 10in laptop. If you were starting from scratch, I’d suggest a 6in smartphone, a 10-12in touch-screen convertible and a desktop PC or all-in-one with a 24in or 27in screen. That’s the kind of system I use myself. There’s not much overlap between the three devices, and you get the maximum value out of each one.

You should also think about integration. I’m assuming your daughter has a Windows laptop, because Apple users always mention it. If she has a MacBook Pro and an iPhone, she could easily integrate an iPad or, preferably, an iPad Pro with a Smart Keyboard. Those wouldn’t be obvious choices for someone with an Android smartphone and a Windows laptop.

I’m not saying you shouldn’t buy any particular product, just that you should think about how they all work together.

At one time, lots of us used styli with handheld organisers or PDAs (personal digital assistants) like the Palm and Pocket PC devices that were popular before smartphones swept the market. There were two reasons for this. First, we didn’t have capacitive screens that worked well with fingers. Second, the user interfaces required more precision than finger ends allowed. The stylus was really a mouse substitute. User interfaces had to be redesigned to make programs finger-friendly. This also added something you didn’t get with a stylus: the ability to use more than one finger at a time.

While the Pocket PC and Windows XP Tablet Edition provided pretty good character recognition, the stylus has never really been comfortable for extended note-taking. People try it but most of them soon give up. In my case, I switched to a Livescribe smartpen, which has the advantage of recording talks and interviews while you handwrite notes on special paper. (Other smartpens are available.) After that I went back to using reporters’ notebooks while recording things with a separate digital recorder.

More recent research from Princeton University found that students who take longhand notes learn better than the ones who take notes on a laptop.

I’d therefore suggest your daughter sticks with the familiar notebook and pen paradigm, and perhaps adds a digital recorder. (You can record things with a smartphone, but recording for several hours a day runs the battery down.)

My occasional need to turn cursive handwriting into text was solved by speech recognition on Android smartphones or Chrome browsers. (Other speech-to-text systems are available.)

Who needs a tablet? 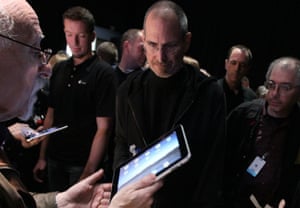 Former Apple CEO Steve Jobs at the launch of the iPad in 2010. Photograph: Justin Sullivan/Getty Images

Tablets have been around for decades – the GridPad was launched in 1989 – but consumer sales only took off when Apple launched the iPad in 2010. However, sales peaked in 2014, and the market has declined since then. Some regular users will stick with them because they’ve adapted to various apps, and they are terrific for toddlers, but most of us have given up on the idea that tablets can replace laptops.

The tablet market has also been disrupted by the growth of Windows 2-in-1s and convertibles. They aren’t great tablets, but they work well enough to replace dedicated tablets while still functioning as laptops.

Perhaps even more damage has been done by the growth in smartphone screens: even Apple has launched an iPhone with a 6.5in screen. Apps and websites now cater so well for big smartphones that tablets are becoming increasingly irrelevant.

If your daughter was already using a tablet at home and at school, I’m sure she would get some value from using one at university. But if she isn’t, I don’t see much point in starting now. I’d spend the money on a bigger smartphone, if necessary, and a portable keyboard.

Perhaps your daughter could try this minimalist system and see how it goes. She will soon find out whether she needs a bigger screen and a better keyboard while out and about.

You can get a lot done with a smartphone, a mini-keyboard and voice recognition. However, it’s not good for writing essays because you just can’t see enough words on the screen, and editing – moving blocks of text around – is painful. If your daughter needs to do any writing or serious research on campus then there’s no substitute for a 10in or preferably larger screen. In this case, the options include tablets, Chromebooks, and Windows 2-in-1s and convertibles.

In reality, there’s not that much difference in price. Cheap tablets are generally awful, and by the time you’ve bought a decent keyboard/case, you might as well have bought a proper 2-in-1.

Good Chromebooks are about the same price as Windows laptops, and may sport much the same hardware, but most of them don’t have touch screens. The main advantages are the elimination of maintenance, such as installing updates, and possibly better battery life. The inherent lack of functionality should not be a problem because the Chromebook is supplementing a laptop, not trying to replace it.

Windows 2-in-1s have the advantage of being portable, they can double as tablets, and can still run the full Microsoft Office and other software for working on the go. And your daughter, I assume, already knows how to use one. The main drawback is the maintenance, but that’s not a problem if the device works correctly when using an external hard drive for Windows updates. 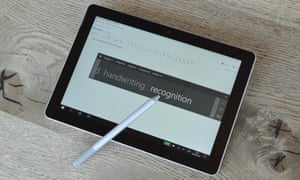 A Microsoft Surface Pro is almost the ideal student device, but costs too much for your purposes, and duplicates the functions of your daughter’s more-than-adequate laptop. You might look at the new Surface Go as a more affordable option (£360 to students, keyboard extra), and yes, it does support a pen. Our own Samuel Gibbs just gave it a five-star review.

A much cheaper alternative is a 10in touch-screen Lenovo Miix 320, which currently costs £129.99. I normally recommend against Windows machines with only 2GB of memory and 32GB of storage. However, I bought an earlier Miix 3 for £150 three years ago, and it has always updated Windows 10 correctly when plugged into an external hard drive.

Prev：What Is your security camera missing?